Projects may need to limit some features, such as the ability to revert changes made by other users, to a smaller set of trusted contributors.

In any project there is usually a need to restrict certain features to a smaller group of privileged users. For example only project administrators might be able to apply a Temporary Block to a user account. Or the ability to apply Bulk Changes might be limited to users that have shown they are capable of using the necessary tools with due care and attention.

Role based access control is a common way to restrict features and abilities to specific user accounts. A project team can retain control over which users have specific roles by explicitly granting those rights through an administration tool.

It is important to have Clearly Defined Roles so both the project team and the community understand their responsibilities.

In large communities it might be helpful to allow users to Automatically Acquire Privileges to share work and responsibilities.

In a large community it can be time-consuming to individually assess contributors in order to grant them specific privileges or roles. 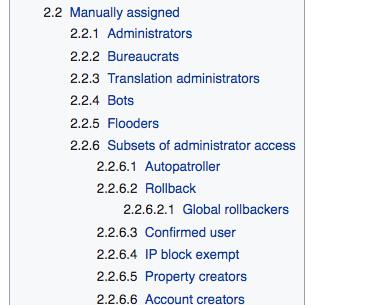